Use Rake::Builder as a Make Replacement:

I've put together a rake-based system for building C and C++ projects.

I've called it Rake::Builder, it's available on GitHub here.

Build systems are complicated by external dependencies: finding third-party headers and libraries. Often there is a specific configuration for each operating system and distribution.

The standard system is GNU's autoconf system, but it is a nightmare. At the most simple level, you distribute source code with a Makefile.

The problem is that Makefiles are just pure dependency managers - if they don't find what they need, they just fail.

The solution to that problem is the use of

So, with configure, the user then does the following:

But, configure itself is a long file, and it's is a program: about 6000 lines of shell code.

The solution to having to maintain configure? Generate it!

With autotools, there is a seemingly eternal regress of configuration files and scripts generated by other scripts.

This was my project's root directory listing before I gave up on autoconf:

Fifteen of those files are involved in the mechanics of autoconf. 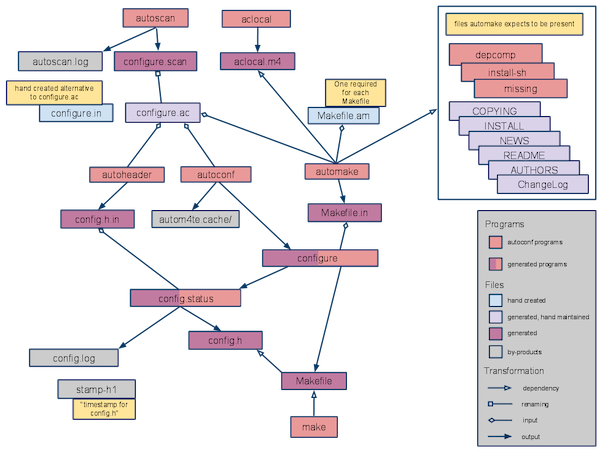 Autoconf doesn't really address the issue of building on various systems and adapting semi-automatically. You still have to add all the settings, but you have to learn where in a myriad of files these settings are to be placed.

Of the autoconf alternatives, rake seems to offer the cleanest solution. Rake itself was apparently created as a build system for C, but out of the box it's too generic: it's simply a dependency handling system.

There are already a number of specializations of rake. In Rails projects, and Gem building, Rakefiles handle maintenance, testing, documentation building and packaging.

Rake::Builder is my attempt to specialise rake to the task of building C and C++ projects.

I've got to version 0.0.11 and it now builds the following types of projects:

This is an example with two build targets: a static library and a test executable, with the test project depending on the library:

I'm about to start using Rake::Builder on a sizeable C++ project using QT, so I'll have a chance to see if it handles real world stuff without turning into autoconf.