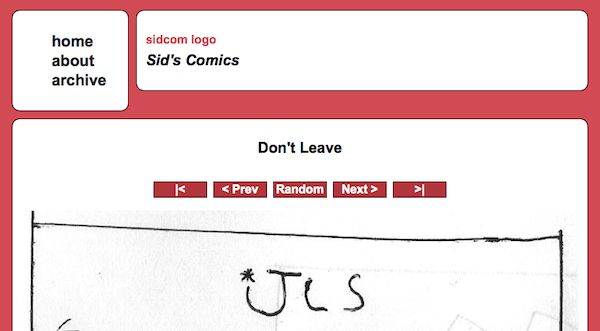 I have a young relative who draws a lot of comic strips, and thinking it would be nice if he could publish them, I looked around for an Open Source system.

I wanted something that was as near to XKCD as possible - latest comic, next/previous and random.

Not finding anything that was both pretty and ultra-simple, I decided to write my own.

The version for my relative is here - the system will be up on GitHub as soon as I finish making it configurable.

If you've read the title of this post, you won't be surprised to read that I chose Sinatra.

I decided to use DataMapper as the ORM.

I'm also using SQLite for both development and production.

As will be clear from the example site, I didn't work over hard on making a fresh graphic look -

all I did was strip out a lot of HTML that was there to make rounded corners,

and replaced it with Mozilla and WebKit specific rounding.

I then translated the HTML into HAML and

the CSS into SASS (SCSS).

Documentation for Sinatra, DataMapper, HAML and SASS is quite good, so things went quite smoothly.

What follows is a list of the phases I went through while developing (on Ubuntu), and especially the bits I had trouble with.

at startup, table columns are adjusted to match the declaration in the equivalent class.

This application has a 'public' and an 'admin' area, so I actually created two Sinatra Apps, wrapping one in Rack::Auth::Digest::MD5.

Sinatra apps have access to a number of globals, I used:

This app being a little more complex than my first, I decided to implement some Rails-like helpers.

The most important helper is url_for.

Sinatra - by design - includes routing in the structure of an app, so it cannot provide pre-cooked methods of the sort.

I found HAML very easy to start using, what I didn't immediately understand was:

how to interpolate variables,

how to call functions,

and how to include partials.

These are actually all the same problem, but it took me a while to realize that!

Again, these can be evaluated as above:

I chose to keep my SCSS files in a subdirectory under my views directory, and generate CSS from them under the static path.

During development, you need to keep the static versions up to date, and to do so, you just need to keep a process running as follows:

The code can be kept DRY, and if you decide to, Sinatra projects can be quite easily transformed into Rails projects.

Actually, I have doubts whether it was worth doing this project in Sinatra -

a stripped-down Rails 3 project would have been just as lightweight and easy to develop.

But, then again, it's useful to run a sytem through its paces, to have an idea what areas it can usefully be applied to.